Most of us treasure the picturesque cliffs and rocky escarpments of Lory State Park for their scenic beauty. University of Northern Colorado professor, Dr. Lauryn Benedict, also values these rocky sites for the biodiversity they add to the landscape. Her research focuses on two closely related birds, which inhabit only the rockiest of habitats in the western U.S.: the Rock Wren and the Canyon Wren.

Even experienced birdwatchers need a good look (or listen) to differentiate these two small, brown bird species. They are similar in size, shape, coloration, nesting and food habits. What separates the two species and their habitat use? How do they interact and co-exist? What are their adaptations for living in rocky terrain?  These and other questions have fueled a variety of continuing research projects for Dr. Benedict and her graduate students, in Lory State Park and elsewhere along the Front Range, over the past four years. 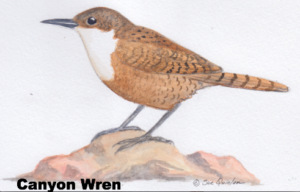 Both wren species build nest cups of woven grass inside their nesting crevices, but only Rock Wrens build elaborate stone paved entrances, Benedict reports.  A skilled observer can learn to spot Rock Wren nests just by looking for the distinctive stone pile entrances. Intrigued by this curious stone-collecting behavior, which is highly unusual among birds–known in less than .3% of birds worldwide–Benedict and her collaborator, Nat Warning wanted to learn more.

During many hours of careful observation of marked birds, they observed only female Rock Wrens carrying stones to nesting sites.   Once the nesting season was over, Warning undertook the tedious task of counting, measuring and weighing all the stones collected in and around 42 nest sites.  They learned that each female Rock Wren had carried an average 222 stones weighing (in total) an average 560 gms.  About a third of the nests examined contained over 700 gm of stones and one nest was paved by 1.4 kg of stones!  That is about the equivalent of a 100-pound woman lugging 7,700 lbs of bowling ball sized rocks! 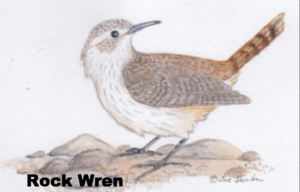 Why do these tiny birds go to all that trouble?  The answers aren’t entirely clear, but research by Warning and Benedict suggests the rock paving helps reduce the nest entrance size, may reduce water intrusion into nests, and most intriguingly, may enhance or alter the sounds made by an approaching predator, possibly giving an incubating female more time to escape.

Another difference between the two wren species that particularly fascinates Benedict is the contrast in their singing behaviors. The unforgettable descending whistle call of the Canyon Wren is an iconic sound of western canyons.  Far fewer people recognize the much more variable and melodious songs of a Rock Wren.  Benedict says Canyon Wrens sing only five different song types while an individual Rock Wren may have 35 to 100 different song types. Why do Rock Wrens use so many different songs while Canyon Wrens use so few?  And what do the different songs and calls of the two species mean?  These are just a few of the ecological mysteries Benedict is still working to unravel through her field work.

To learn more about this scientist’s work and listen to some of her recordings of the songs and calls of both wren species, visit her website: http://www.unco.edu/biology/lbenedict/research.html You can help Benedict learn more about these wrens and their ecology by posting your observations of either species at ebird.org/ or emailing her directly at <Lauryn.Benedict@unco.edu>

And next time you enjoy the rocky landscape of Lory State Park, remember to look for these fascinating little birds that make their homes amidst those scenic rocks.

Susan E. Quinlan is a wildlife biologist who for many years worked as a field biologist and outdoor educator. A writer, teacher, and naturalist guide, she has traveled to many parts of the world, exploring diverse environments from the high arctic tundra to tropical rain forests.