DENVER, Colo. – With spring appearing in every corner of Colorado, residents and visitors will soon see an abundance of new life, including young wildlife. Many birds and mammals give birth this time of year, and Colorado Parks and Wildlife advises that if you see young wildlife to leave them alone.

Now through June, newborn wildlife may be found in backyards, along trails, open spaces or in some rare instances in parking lots.

Colorado Parks and Wildlife receives numerous calls each year regarding young wildlife that has been “abandoned” by adult animals. And in pet-friendly Colorado, many humans are tempted to “help” a young animal by picking it up or trying to feed it. Well-meaning people sometimes bring baby wildlife to rehabilitation facilities or to CPW offices, but that’s the wrong thing to do. There is simply no substitute for their natural parents.

Wildlife experts want people to know that it is quite normal for adult animals to leave their young alone in a safe place while they go search for food. And in the case of baby birds, people are quick to deem them abandoned, though in most cases, they are just learning to fly and are likely very near their nests. 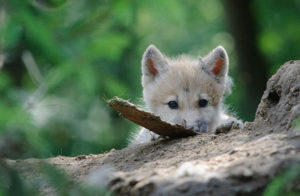 “Baby mammals are scentless in order to prevent predators from finding them,” said Janet George, senior terrestrial biologist for CPW. “When humans touch these animals, they leave behind a scent their adults will not recognize or may even fear. This can result in true abandonment of healthy offspring.It is best for people to leave them alone.”

Because birds do not have a highly developed sense of smell, baby songbirds can be picked up and moved out of harm’s way or placed back in their nests if absolutely necessary. Raptors, however, are a different story; Great-horned owls and other raptors are territorial and have been known to fly directly at humans seen as a threat to their young.

Deer fawns found in backyards are frequently brought to wildlife offices. They have not been abandoned so don’t touch them.

If you do encounter young wildlife on the trail or in your yard, leave the animal where it is, and be careful to keep pets out of the area. Use binoculars to quietly view the animal from a distance. It’s important not to get too close to the animals, nor linger near them, as human proximity and time spent in the area may make the wild parents afraid to return.

If 24 hours pass and the parent does not return, or a young animal appears sick and weak, it is possible the newborn was abandoned or the parent may be unable to return due to sickness or death. In this instance, concerned citizens should call the nearest CPW office. The agency has teams available to determine if an animal truly needs aid and the ability to safely transport it to a certified wildlife rehabilitation center if necessary. Never move an animal yourself.

In addition to potential harm to the animal, there is a potential for harm to humans. Handling wildlife poses risks, including disease transmission of rabies, distemper or other illnesses. Wildlife can also carry fleas that might subsequently spread disease to humans or pets.

Finally, it is imperative for Coloradans to understand that there is a vast difference between wildlife and domesticated animals. It is illegal to feed or own most wildlife in Colorado, so despite best intentions, “adopting” a wild animal rarely leads to good outcomes. Hand-fed animals with no fear of humans are rarely returned to the wild due to their lack of survival skills. Licensed wildlife rehabilitators are trained to use methods that will give a wild animal the best chance of surviving upon release. CPW asks people to call the agency or these rehabilitators to ensure the best outcome for animals.

For more information on living with wildlife, visit http://cpw.state.co.us/learn/Pages/LivingwithWildlife.aspx